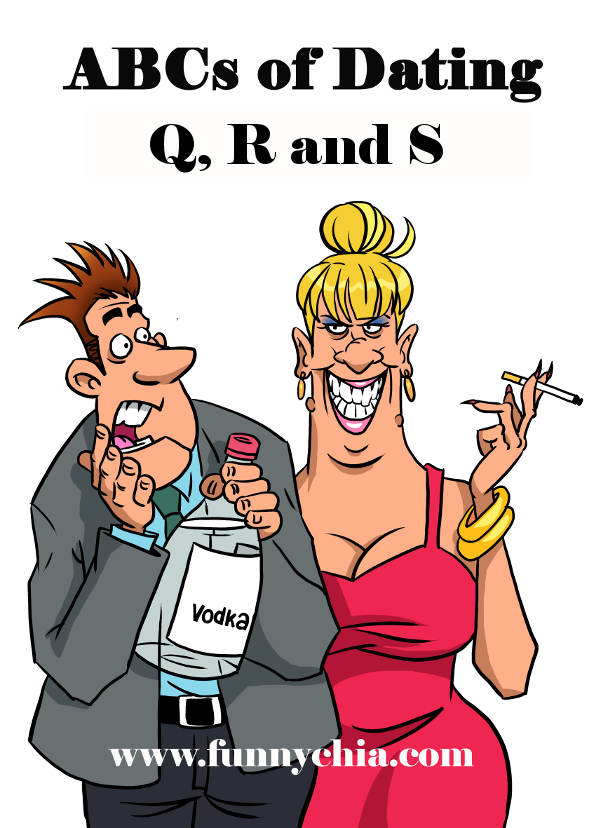 This is the sixth installment in my 8-part ABCs of Dating series. Enjoy!

There are so many questions when it comes to dating.  For instance, why and/or how is the person currently available?  Is he divorced?  Was there a bad break-up?  These are important questions.  It is helpful to know if there is a lot of emotional baggage you and your partner will have to deal with – especially when he might take his hostility out on you.

For example, if his ex cheated on him, he may be very possessive and controlling and demand to always know details of your activities.  On the one hand, it isn’t hard to provide updates now that we all carry cell phones, but on the other hand, it can get exhausting to constantly explain where you are, what you are doing, and who you are with.  Has he met this friend?  Why or why not?  The interrogation can get lengthy.

If he doesn’t have bad breakup baggage, then you have different concerns.  Why is he still single?  What is wrong with him?  It is the question I get a lot – what is wrong with me?  It’s a bit off-putting, so it is a good idea to find a nice way to say it, i.e., “why are you available?”  And when he explains why other relationships haven’t worked out, it is good to ask what his deal breakers are.

Often in online dating, you’ll see the unhelpful response “ask me later.”  And this response is all you’ll see in that online dating profile.  My friends and I theorize that the men who can’t be bothered to answer the questionnaire are married men who are checking things out to see what kind of women are available.  It’s annoying because the responses are what help us get a feel for who they are.  It’s also annoying that married men are prowling for women when we are looking for long-term relationships, not cheating relationships.  Imagine what you’re going to tell yourself:  “Yippee, yahoo, it’s my turn to go out to dinner with this married man who made time for me!  And he is breaking his vow to his wife!  Wow, what a catch!”  (I hope I don’t need to point out that’s sarcasm.  I don’t, right?)

For more angst in relation to married men, see M for Married Men and a Certain Meme.

R for Rectum or Rat

We all know another name for the orifice known as the rectum, but this tale is not deserving of top billing as A.  I also considered placement as J for Jerk, but this story should not come before Jesus.  I wasted far too much time on this man and it is not worth making him a priority.  He is, however, worthy of a limerick, or four.

There once was a man from P.A.,

My city was his get-away.

He wore pants that were too tight,

I hoped he was Mr. Right,

It’s good I didn’t have my way.

That fetish kept me in stitches.

My int’rest fed his ego,

I should have called him zero.

That wasn’t one of my niches.

So there’s Mr. High and Mighty,

So high his view of himself,

He chose to ignore my self.

He thought he was God almighty.

His fetish wasn’t clean and neat.

The idiot was indiscreet.

But he found himself a wife,

And she joined his stinky life.

Hear the squish when they take a seat.

S for Safety or Stalkers

It seems very easy to run an online dating site.  Basically, you just have the website and its algorithms and all that.  But once it is up and running, it’s time to simply collect money from desperate singletons and offer minimal support.  That’s what it seems like, anyway, when you use an online dating site.

A couple years ago, I was on a website, and there was a man who indicated he was interested.  We had the basic “how are you doing” surface chat and I determined I wasn’t interested.  Over the next few days, I received messages from several different profiles and had the typical basic chatty conversations.

It turned out that all the profiles – four or five – belonged to the same guy.  He posted different details and different photos with each one, so it was easy to not realize they were all the same.  I had to send a report to tech support since one user having multiple profiles was not allowed.  I would have preferred to speak to someone on the phone about it, but I had to wait for tech support to get to my report instead.

Although I was worried for my safety, I found comfort in the knowledge I had not released any personally identifiable information, so he could not find my home, my work or anything.

This acts as a reminder to stay safe.  Don’t give out your personal information, your address, phone number or work address.  All of that can be misused and have bad consequences.  If you need to communicate via phone, you can chat via a messenger or you can use the appropriate keypad code to hide your number.

When you do meet someone in person that you met online, it is smart to get a first and last name, and report that information, along with where you’re going and when, to a trusted friend or family member.

A friend had trouble with a man she met through a phone dating app.  He wouldn’t let her go when she ended it.  The man continued to call her cell, her workplace, and messaged her friends who were also on the app.  He just wouldn’t go away.  She got a protective order against him to make him stop.

Be careful and be wise.  It is better to be safe than for your demise to become a story on the 11 o’clock news.

It is better to be safe than for your demise to become a story on the 11 o’clock news. Click To Tweet