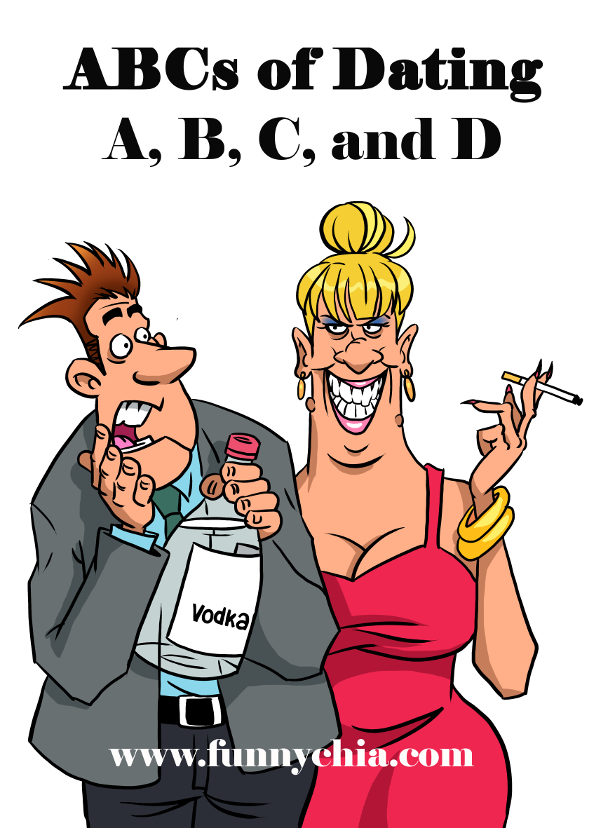 Since I have been single all my life – to just beyond forty, I have learned some things about dating and had some interesting experiences along the way.  I’ve also wished I could share some insight and tips.  This is my chance —    I feel so many are basic which led me to create the ABCs of Dating – well, with my experiences and views.

A lot of people think being single is exciting and full of adventure, like on television shows such as Friends or Sex and the City.  This is so untrue.  But it helps us start out the alphabet with A for Assumptions.  It’s amazing how things you think should be automatic or assumed just can’t be assumed.  For instance, a friend recently went on a date with a nice man who was educated and funny.  She found out on the date that he had a criminal record due to child pornography.   Oops.

It’s amazing that we have to ask so many questions before going out on a date rather than assume that the person we are dating does not have a criminal record.   (There is a lot more on this later, in Q for Questions.)

Another assumption I tend to have when dating is that the men I meet or who are interested are in fact single.  Unfortunately, in the 21st century, or maybe it’s because I’m beyond my mid-twenties, lots of married men are out there dating.  We’ll get to that later though, in M for Married Men and a Certain Meme.

It seems like you always have to remain on your guard, because crazy things will take you by surprise.  And that is why it is important to have boundaries.  That’s B for Boundaries, by the way.  In addition to establishing your own boundaries, you also have to require respect for them, all while respecting your date’s.  This can make some awkward dating issues.

I don’t like to be tickled mercilessly.  Call me crazy, I like to breathe.  It’s a potential deal-breaker when a date decides it is fun to discover my ticklish spots and begin “tickle torture”.  (I have an older sister and experience in this matter, which is why I call it “tickle torture”.)  With many people, if you indicate you do not want to be tickled, they won’t tickle you, but some people require repeated restrictions in order to respect your boundary.

By the way, the Amazon links herein are affiliate links, which means that if you click the link and it leads to a purchase, I will receive a small commission at no extra cost to you.

A good book about boundaries is the aptly-titled Boundaries, by Dr. Henry Cloud and Dr. John Townsend.

So many things start with C.  Cookie, of course, and I am a big fan of Cookie Monster.  But let’s not get distracted (there are no cookies around as I write this).  I have been a church-going Christian all my life, so I will call this C for Church.  Here’s another disclaimer:  In this ABCs series, there are multiple times I discuss Christians.  In any group of people, there are some stinkers and also wonderful, amazing people.  Please don’t think because of my discussions of the stinkers that all Christians fall in that category.

Interestingly, it was through my church network that I happened upon a captivating notion.  The idea was spanking in a consenting romantic relationship, which is something I found titillating since reading a scene in a Harlequin romance novel in high school.  This domestic style was whispered about in my social circle, curiosity killed the cat, and I had to research it.

My research revealed a consensual but abusive power dynamic.  Generally, this arrangement is created in a marriage, with the husband being the head of household in a dominant role, and his wife in the subservient or submissive role.  Rules and expectations are established in their marriage,  and the wife is expected to adhere to these rules and expectations.  Failure to meet the expectations or outright disobedience will be met with punishment.  Spanking is a frequently-used punishment, but she may receive another punishment.  An alternative punishment may be writing lines, like “I will not lie to my husband.”  Imagine writing that longhand 1,000 times.  Other consequences include giving up a special outing like a concert or manicure/pedicure, or a reduction in spending money.

I will not lie to my husband. Imagine writing that longhand 1,000 times. Click To TweetSometimes the rules and expectations are unreasonable, like when the husband gives his wife an awkward choice.  For example, if you do this, then you will be in trouble for reason A, but if you choose not to, you will still be in breach of the requirement for reason B.  Either way, you will have to suffer, but your choice of action dictates what that will be.

One example is when the wife basically gave up being a mature adult.  She could say or do horribly immature, selfish or rude things, but she wasn’t responsible for her own behavior.  It was her husband’s job to essentially be her parent.

This power dynamic was presented fictionally in Fifty Shades of Grey as a bedroom or red room game.  It was explained to me by a potential date as a lifestyle choice and absolutely not an enjoyable game.  We know every rose has its thorn.  Metaphorically speaking, this man showed me the thorns and forgot to tell me about the roses.  That dating relationship never happened.  So yes, my view of it is pretty negative.