It took me awhile to move out on my own.  After graduating from college, I returned to my parents’ house, toting along with me my four years’ accumulation of dorm room necessities.  Organizing my belongings into the room I grew up in was difficult, especially since I have always been a bit of a shopaholic, and I liked to purchase new things for my future home.

I initially enjoyed my apartment, with its two bedrooms and spacious bathroom.  I worked two jobs – one full-time and one part-time – and didn’t have much spare time to maintain it.  Then, I began graduate school, and the time I could have used for maintaining my home was better spent on reading and studying.

Sometime in 2002 or 2003, I discovered Flylady (Marla Cilley).  I’m not sure how I learned about her, perhaps it was a newspaper article or word of mouth.  I enjoyed the testimonials, routines and reminders, but I didn’t care for some of her “musts”, i.e., you must shine the sink, you must wear lace-up shoes, etc.

Despite my being not fully on board with all Flylady’s teachings, and needing to get organized, I founded a local Flylady support group.  We did Portable Project afternoons, where we got together with our various portable projects and worked on them while chatting.  One time, we met at my apartment, and one of the ladies helped me with my home office, while another lady worked at my kitchen table sorting through her plastic bags full of paper.  Although there was a core group of us who got along well with each other, the group grew, and interpersonal issues became a problem.  The ladies grew tired of the drama, participation decreased, and within a few months, the group was gone.

I never was able to get my apartment fully organized, so when I moved in 2005, a couple boxes were full of loose papers destined for my office.  I organized my move as well as I could, knowing I could not be in all places at the same time, and I numbered and labeled all my boxes with their destination rooms, and I had a master list of the numbers and their contents on a legal pad.

I was employed full-time during the move, and in addition to having a mover transport the furniture, my family and a couple friends helped move the boxes and get them to the appropriate rooms.   This reminds me – I thought I was being smart by labeling one essential box “Front Closet”, and it got buried in the front closet and it took me months to find it, because organizing the front closet just wasn’t that important.  I guess next time, I’ll label it “Essentials”, so it is easier to keep track of.  But I digress – because I only took a couple days off work, the main priority was to get me settled in and set up enough to function properly.  And so it went, working and having to-do lists to help remind me to get things done.

Although I’ve had a couple periods where I have made a big push to get organized, I have not successfully done so.  In 2012, I took on a project where I rearranged half my furniture – not just within each room, but some things moving from one to another.  This caused more upheaval, as the contents of my desk, for example, of the piles on and around it, etc., also had to be sorted and relocated – or not.  Another item I wanted to move, my coffee table, lingered for a long time before I finally moved it to the basement (in 2013).  I loved using that coffee table.  It has one drawer in it, and I could have an ocean of paper under it, on top of it, and have the drawer completely stuffed!  Despite the coffee table’s absence, my living room is still a haven for paper and clutter.

After a long period of not working, I began a new job in January 2014.  I was ecstatic because adding some structure to my days and a steady paycheck would really help me pull myself and my home back together.  And then one day, I opened an e-mail from Flylady, and she talked about how many people find inspiration from other organizers, fascinating ideas on Pinterest, and then she specifically mentioned Alejandra of Alejandra.tv.  And so, for the past couple of years, I’ve been learning from Alejandra. Her system helped complete the puzzle for me, but learning still did not get the work done. 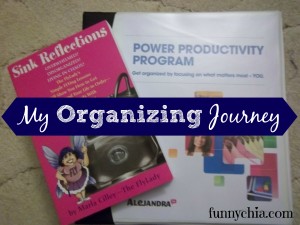 Obviously, my organizing journey is not over, but I am thankfully beyond “just beginning”!  In upcoming posts, I hope to share about getting organized, but I have other priorities, typical chores like laundry and dishes, fitness, working a full-time job, etc. Somehow I have to take the time to make progress on the organizing front so I have some news to report.

It’s good to state these goals in writing. Now I just have to build consistent habits. Thanks for reading and being a companion on this journey!